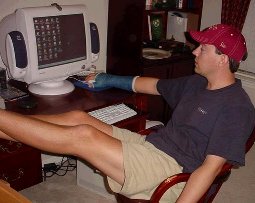 People on a global level spent, on average, 5.5 hours on social networks in February.

According to a Nielson Report just released today,  “on average, global web users across 10 countries spent roughly five and a half hours on social networks in February 2010, up more than two hours from the same time last year.”

And don’t think Americans took the #1 spot for spending the most time online – the Italians and Australians actually topped the U.S. average of 6 hours and 3 minutes by 25 minutes and 22 minutes, respectively.