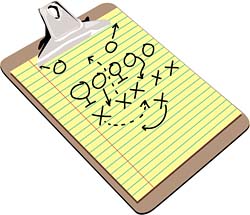 Is Apple taking a play right out of Google’s playbook?

Rumor has it that the new 4G iPhone will be coming out as early as June – just a few months from now.

Another rumor has it that Apple will be breaking the “exclusivity” pact it has with AT&T in order to sell the iPhone with Verizon as well.

So what is Apple doing? In summary, they are moving toward 4G speed and expanding their customer base by opening up to other carriers with the iPhone.

Guess who has been leading the way with these types of business strategies since day one – Google!

Also, by nature and design, Android was never restricted to only one carrier. This is also the difference between focusing on a “device” versus an “operating system” type approach.

Google diversified and expanded the Android market place by releasing their own Google phone – the Nexus One.

These initiatives are what puts Google at the forefront of the mobile revolution.

And it’s why we are seeing companies like Apple being left with taking plays straight from the Google playbook.

10 replies on “Is Apple Taking A Play From Google’s Playbook?”

Whoever wrote this was retarded. Apple isn't breaking anything to sell a Verizon iphone (of which I will believe it when I see it). Secondly, Apple isn't stealing plays from Google. If anything Google was stealing plays from RIM. Blackberries have been with multiple carriers for years. Somebody needs to take this apple-hating, and put it to some good use. Like research maybe?

as someone who has owned an iPhone from day one, I'm far from an Apple hater. Blackberry is not even in the same universe for a point of comparison – if we are going to compare, let's at least keep it to phones that people actually browse the web from. Yes, I know Blackberry can get to the web, but really… can you show me a single Blackberry owner who is pleased with their web browsing experience.

Thanks for commenting and at least visiting my blog!

who writes this shit?

with a name like "the educated" could you not have found a more "educated" response? really….?

LOL at the educated response =)

i agree, google’s nudging everyone into the right direction. they have the right vision and philosophy.