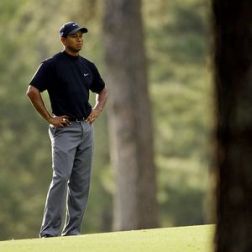 Tiger Woods seems to have a level of focus that has not been seen before from the gold champion.

It’s certainly not new news anymore that Tiger Woods is going to be making his comeback debut in August.

But what is catching everyone off guard, and has the media already in a frenzy, is his unusually high level of focus and discipline in preparing for The Masters.

Tiger Woods has returned to Augusta National two weeks in a row now in a dramatic departure from his normal training schedule.

A typical prep routine for The Masters would be one pre-tournament workout at Augusta to orient himself with any changes to the golf course.

But then the majority of Woods’ preparation would be back at Isleworth where he worked directly with his coach Hank Haney.  The preparation at Isleworth would typically be focused on the shots he would need to make during the Masters tournament.

Does this new level of focus tell us anything about Tiger Woods, and the perhaps the changed man he is coming out of the drama of the previous months?

It would seem by this new, rigorous preparation schedule that Tiger Woods plans on making a big splash upon his return to golf course.

Certainly the media will be making a huge episode of it.

But Tiger Woods seems to want to express himself through his performance rather than through any words he could speak.