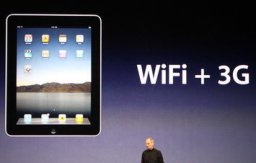 If you think you are going to get an iPad 3G tomorrow, then you need to just stay home!

There’s been one looming issue I’ve had with this whole iPad release taking place tomorrow.

It’s really been perplexing to me as to why Apple would release the iPad without 3G. With the success of the iPhone 3G, people obviously want fast internet access on their device.

The iPad 3G isn’t going to be available until later this month – April 20th is the latest I’ve heard.  I believe Apple is launching this first version simply because of the hype and sales frenzy that will happen – not because it’s the best product for you, the iPad consumer.

So in my humble opinion, it’s worth waiting the 2 or 3 weeks to get the 3G model.

After all, as soon as you turn it on you are more than likely going to want to do something that requires web access!

You do realize that wi-fi also gives you web access