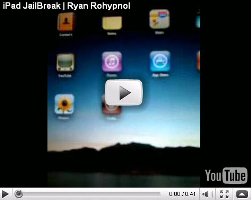 It’s been just a little over 24 hours since the release of the iPad and we now have the very first iPad jailbreak.

I’m defining “jailbreak” as being able to install any 3rd party application on the iPad and completely by-passing the iPad OS 3.2 firmware.

A developer named Musclenerd claims to have jailbroken the iPad, but all he did was access the root directory – he did not open the iPad up to accept 3rd party applications.

The video below shows the iPad start up and access the 3rd party software application Cydia – as anyone in the iPhone hacking world knows, Cydia could not be loaded onto an iPad without it being jailbroken.

Stay updated to get the release:

Will be released to public soon!

I'm sure i don't have to even point out that this is fake, purely to generate buzz and promote the name ryan rohypnol or however you spell that , I left a comment on the YouTube page stating that this was nothing more than simple xcode app, but apparently the creator is just waiting for some "cydia install files" before progress can continue… so I'll just cancel my christmas holiday and keep an eye on the youtube channel i guess… /sarcasm

Seems legit to me, I know Ryan works with the dev team

i hope you are having a laugh