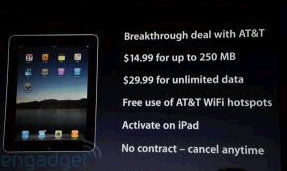 The release date for the iPad has passed – that was yesterday, April 3rd, 2010. Next up is the iPad 3G. We know that the iPad 3G will be coming sometime toward the end of April, however, we don’t have an official iPad 3G release date other than “the end of Arpil.”

According to Steve Jobs, the 250 mb/month data plan for the iPad will be sufficient for most users.

"However, as it typically the case with AT&T, if you run over that data usage then AT&T will not tell you that you’re over – they will just start charging you exorbitant pricing per mb of data used."

Actually, if you had done any research at all, you would know that you get a warning when you have 20% of your data left, 10% of your data left, and when you're out of data. When you run out of the 250Mb, you are given the option to add an additional 250Mb or switch to the unlimited plan.

Hi Kathryn – I've updated the article with the numbers you provided.

Thank you for your input and thanks for visiting!

And I'm guessing, since it's basically (or as far as I can gather) pre-paid, they'll probably just cut off 3G data altogether. Of course, AT&T will probably still try to pinch every last penny from the end user anyway …

I had verizon and had to twist my body into weird positions in order to get a call. I changed over to AT&T and my Iphone works perfectly. It seems that people make AT&T the bad guy. If so…just don't buy the 3G model. Or wait for a year or two and maybe you can go to Verizon

justin Bieber is my boyfriend

The burning question here should be:

Is the 3G unlmited plan truly unlimited? Most likely not and will come with a 5GB limit. Pointless if you ask me.

justin Bieber is my boyfriend

Who is Justin Bieber?

I jsut recieved notice that my Ipad has shipped and will be here tomorrrow by 4:30!!