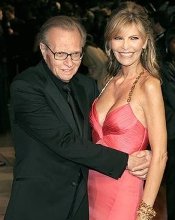 Breaking news is starting to flood the web with the news about Larry King and his now 7th wife, Shawn Southwick and the fact that they are filing for a divorce.

Shocker, I know… I mean really Larry?  Is it even necessary after 7 wives to even attempt to get married anymore?

In the filings, Larry King has requested that himself and Shawn Southwick maintain joint custody of the children.

Shawn Southwick, however, is taking a bit more of an aggressive approach regarding the children and she is requesting primary custody of the kids, spousal and child support, and real estate including the Beverly Hills house she and King shared.

“It’s a very sad day in Larry’s life and he hopes the divorce will be amicable,” King’s lawyer Susan Carter told the website. “Larry loves his children very much and will be an integral part of their lives.”

While she is King’s seventh wife, the CNN host has been married eight times. He married Alene Aknis twice.