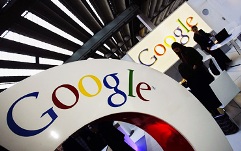 But Google shares fell in after-hours trading as the Internet giant failed to meet the “whisper number,” the number that unofficially circulates on Wall Street before an earnings announcement. The stock slumped to about $577 a share after hours. It had risen $6.30 to $595.30 in regular trading.

Investors are also concerned about the rising regulatory and legal pressures on the company as well as intensified competition with onetime ally Apple Inc.

Shares of Google had risen about 5% since Monday.