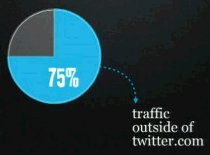 When Twitter opened up its developers conference, better known as Chirp, they started out by releasing a ton of stats on Twitter.

Here are some highlighted stats that were released:

And it was that last statistic that really caught my attention – 75% of Twitter traffic comes from outside of Twitter.com.

That means that Twitter apps, both desktop and mobile device apps, are the primary traffic source for interacting on Twitter – sending and receiving tweets, retweeting, etc…

The future of the web, as represented by Twitter

First, I see these numbers as an indication of the future of the Internet as a whole. Everything about the web is being migrated toward being mobile – just look at the recent iPad release.

And since “mobility” is the future of the web, apps are the dominant portal to accessing the information you want and need while on the run.

Twitter is a true example of how people want to be mobile, and how “apps” are becoming the dominant vehicle for delivering that information on mobile devices.

I also see this statistic – 75% of people using Twitter outside of Twitter.com – as a major obstacle to Twitter’s advertising revenue business model.

Running ads on Twitter.com doesn’t make sense to be their primary focus because the majority of their users aren’t even coming to the website.

So that means advertising in the Twitter streams themselves.

But when you start sending out tweets that are “spammy”, that starts to upset people and could become a factor in people no longer using Twitter.

So it’s a dilemma for sure!

No doubt that Twitter is growing and is widely used by people, but how to actually make money from it – that’s a whole different ball game all together.