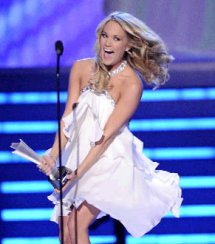 Last night during the 2010 ACM Awards 2010 ceremony, a most embarrassing thing happened, that few people may have even noticed.

First, Carrie Underwood made history at the Academy of Country Music Awards on Sunday night, becoming the first woman to win entertainer of the year twice.