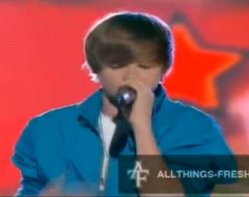 There is no question about who is the current hot pop star on the planet right now. His name is Justin Bieber, and people are literally going crazy trying to see him and meet him.

Justin Bieber has had 7 songs from his debut album on the Billboard Hot 100 chart, but he has reached the top thirty charts in over 10 countries.

People are crazy for Justin Bieber, and he’s only 16 years old!

But Justin Bieber loses out at The Juno Awards

Wow – how is that even possible?

How can Justin Bieber be the most popular, most in demand pop star on the planet and walk away from The Juno Awards without a single award?

I don’t get that at all…

He did a live performance during the show with rapper Drake who ended up stealing the award from Bieber for “New Artist of the Year.”

Here is Justin Bieber’s performance at The Juno Awards:

Could it be because hes nothing more than an untalented fad? Nah, couldn't be that…

Did the author say Drake stole the award? Drake's album is fresh, witty, and imaginative.
This kid sings Disney-approved 80's remakes!
Look at the video, he can't sing particularly well at all, average at best. Teeny-boppers don't hold any sway over critical musical awards. He's lucky Disney owns the company who airs the award show which got him on it at all!