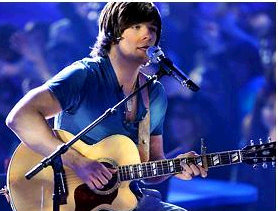 American Idol had a big night last night as it featured the Idol Gives Back 2010 program which has become one of the biggest charity events in the United States.

The American Idol stage was graced by some of the biggest names in the music industry – Carrie Underwood, Alicia Keys, and The Black Eyed Peas just to name a few.

However, American Idol is show that is ultimately in place to determine who the best performer in American is, which means that someone, each week, must be eliminated from the race to become the next American Idol.

The “American Idol” April 21 results witnessed the elimination of Texas singer Tim Urban who was sent back home at the end of the episode.

The judges did not seem a bit surprised when Tim Urban was kicked off American Idol. Tim Urban’s performance of “Better Days” during the inspirational tracks themed episode failed to impress the judges, and that sentiment was obviously widely felt by viewers and voters alike.

The Texas singer had landed in the bottom three on numerous earlier occasions and therefore his elimination did not leave the judges or the viewers that disappointed.

This was not the first time Tim Urban found himself in the bottom three not he voting totem pole – he has been there pretty much throughout the most competitive part of American Idol where voters determine your fate.