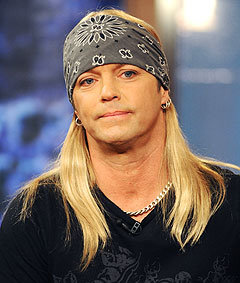 According to People.com, Brett Michaels situation has “taken a turn for the worse.” People is reporting that Brett Michaels was experiencing massive head pain and headaches late Thursday night when the Rocker turned reality TV star was then rushed to an undisclosed hospital.

Brett Michaels was immediately admitted to the intensive care unit and was diagnosed with suffering a subarachnoid hemorrhage (bleeding at the base of his brain stem).

At only 47 years old, Brett Michaels is reportedly in critical condition, and according to sources close to the matter:

“After several CAT scans, MRIs and an angiogram, [doctors] decided to keep Michaels in the ICU and are running several tests to determine the cause. [It] will be touch and go for the next few days while he is under intense observation.”