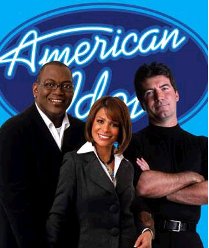 I was just watching CNN Larry King Live and was able to catch a glimpse long enough to see that the American Idol judges – all of them including Ryan Seacrest – were seated around Larry King’s table.

The funniest part that I saw was when Larry King was talking to Simon Cowell and Ryan Seacrest about the tension between them.

Ryan Seacrest was saying that the arguing, and sometimes heated exchanges is mostly part of the show. However, Simon Cowell’s response didn’t seem to 100% justify Seacrests’ explanation of things.

But when Larry King asked Simon Cowell the same question, Simon’s response was “well… 99% of the time I consider him my friend.”

So that leaves a 1% period of time that Simon does not consider Ryan his friend.

The Future of American Idol

Why do I think that?

Because I remember when American Idol first came out, it was talked about non-stop wherever you went. At work, at the mall, at home, etc…

Now, not so much.

Sure, people turn to Google to quickly find out who was kicked off, but it just doesn’t seem to have that “kick” that it used to have, for example when Paula Abdul was there as one of the judges.

I will go ahead and make the prediction that within 3 years, American Idol will be nothing more than a re-run or a “best of” CD set that you buy at Wal-Mart.

Anyway, did you happen to catch the American Idol judge’s on Larry King?

What did you think?