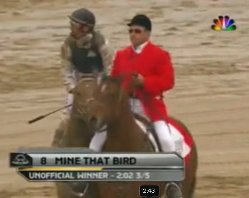 The grand daddy of them all in horse racing – The Kentucky Derby – is set to launch next Saturday, May the 1st at 5PM EST.

Also, last years Kentucky Derby was won by Mine That Bird, a New Mexico-based gelding who rallied from last to win the 135th running of the event last year.  Calvin Burrell was the jockey who won atop MINE THAT BIRD last year to pull off the monumental upset.  He has won 2 of the 3 last three runnings of Kentucky Derby.  You can relive that below.

Here’s a video of the 2009 Kentucky Derby in which Mine That Bird came from behind for the win:

Eskendereya and Rule have been both been pulled out of the race.

Eskendereya  WILL NOT RUN DUE TO INJURY

Make Music For me

Rule  HAS BEEN SCRATCHED AND WILL NOT RUN