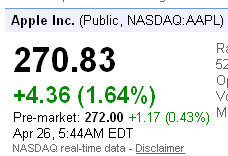 You would be hard pressed to find a stock in the S&P 500 that is having a stronger run than Apple is right now (NASDAQ:AAPL).

Apple just reported earnings that were, quite frankly, unprecedented to even the most trained and educated eye. Profits for Apple rose at an astounding 90%, and nearly every stock analyst undercut the earnings forecast on Apple.

Here are some hard numbers from the Apple’s earnings report:

Apple reported that its profits rose to $3.07 billion, or $3.33 a share, compared with $1.62 billion, or $1.79 a share for the same span last year. Revenue climbed a stunning 49% to $13.5 billion, and the company reported that it sold 8.75 million iPhones in the January-March period – about 1.75 million more than analysts expected. Mac computers and iPod music devices also surprised with big upside.

Again, I believe you would be hard pressed to find any stock currently being traded that has out-gunned the stock analysts by over 36%.

These outstanding earning figures are what allowed Apple’s stock price to hit an all time new high on Wednesday, April 21st. 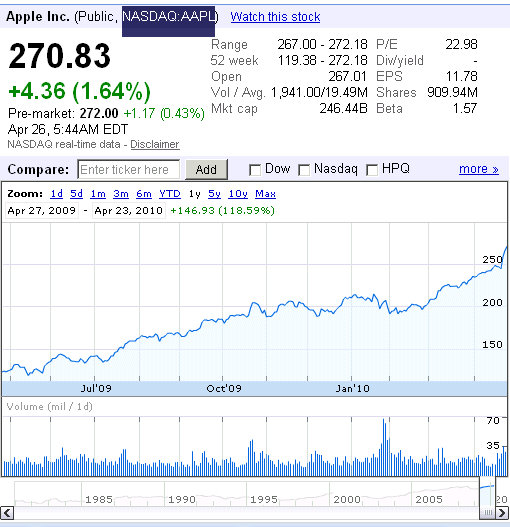