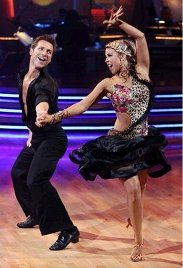 Jake “The Bachelor” Pavelka, Dancing With The Stars Elimination April 27

As the Dancing With The Stars challenge continues, there always has to be a loser, and someone, each week is going to end up disappointed that they can’t continue on in the competition.

Last week, we saw Kate Gosselin get eliminated from Dancing With The Stars. But I have this strange feeling that we’ll see Kate Gosselin back on TV in some form or fashion very soon.

As Jake “The Bachelor” Pavelka said his goodbyes he was obviously very emotional and holding back his tears.

As the Dancing With The Stars competition continues on deeper into the season, the prospective winner is becoming much more difficult to pin point and predict. Nicole Scherzinger has been strong since day on the show, but Chad Ochocinco, who was not even really noticed too much at the beginning, seems to be getting better and better as the show progresses.  And as you probably know, it was Chad Ochocinco’s tango from the previous night that the judges chose to watch again.

So another week of Dancing With The Stars and another person eliminated!

Who will it be next week?