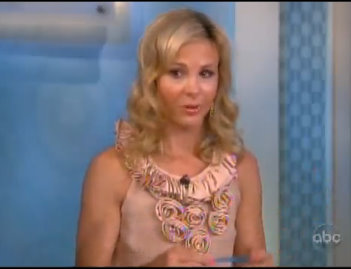 In case you missed it, Elisabeth Hasselbeck has apologized to Erin Andrews for the mean, rude, and downright insensitive things that she said to her.

After the whole incident was over however, Hasselbeck started feeling awful about the things she had said to Erin Andrews and so on The View today, Elisabeth Hasselbeck apologized publicly to Erin Andrews – and she started to almost lose it with crying – but she held it together pretty good.

Here’s the video of Elisabeth Hasselbeck Apologizing to Erin Andrews:

I think in light of what happened … and as inexcusable as it was for that horrific guy to go in and try to peep on her in her hotel room … in some way, if I’m him, I’m like, ‘man, I could have just waited 12 weeks (nervous laughter from crowd)’ … I could have seen this, a little bit less, without the prison time

I think ABC, Disney and Barbara Walters better seriously think about letting Elizabeth go. She is ruining this show!!!!! I cant stand her and her uptight comments. Keep it to yourself Elizabeth, not everyone shares your Holier than Thou attitude. Your an embarresment to women.