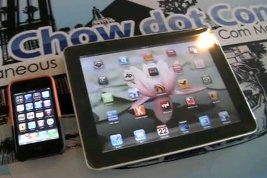 iPad Trick – Turn Any iPad into an iPad 3G

John Chow has figured out this cool way to turn any iPad into an iPad 3G, and simultaneously finding a way to save you $130 from the purchase.

Basically, what John is doing is utilizing his iPhone as the tethering device to broadcast the 3G signal to his iPad, and then the iPad Wi-Fi picks up the 3G directly from the iPhone.

Here’s his video showing you to turn a iPad Wi Fi version into an iPad 3G: