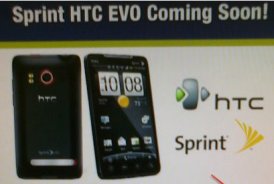 The information came from a leaked Radio Shack advertisement for the HTC EVO which states that pre-orders for the Android powered HTC EVO will be allowed by the end of the month (today is May 6th). 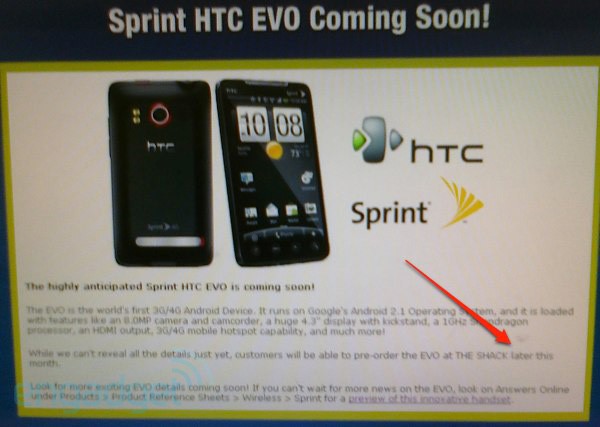 One of the more exciting features of the upcoming Android powered HTC EVO is that is will carry 4G WiMAX connectivity for surfing the web from your phone.

4G is the next big thing in mobile internet connectivity. Apple is widely expected to announce a 4G iPhone on June 7th at their WWDC2010 conference.

However, that’s on June 7th, and as you can see there are 4G phones powered by Android that are beating Apple to the market place.

According to the leaked ad, the 4G HTC EVO will be sold by Sprint via Radio Shack…? Am I reading that right?

So what do you think about the HTV EVO?

I know that I’m super excited about 4G speed and also the combination of 4G on an Android powered phone – should be exciting!

I've been a Sprint user for 20 years! Excellent customer service. I'm using an HTC phone now with Windows Mobile. I'll be waiting in line for this phone with the drool dripping off my chin!

I'm switching from Verizon as well. I'm not paying 60.00 extra a month for my wife and I to have a data package on top of normal coverage…

i'm dropping my ipone to make the switch to android. This Evo was the phone I have been waiting for.

I'm switching from iPhone 3gs to the EVO as well. Can't wait…

I'm switching from iPhone 3gs to the EVO as well. Can't wait…

You are a f**king retard.