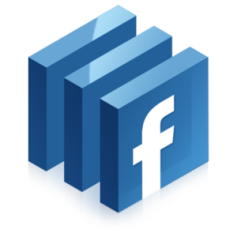 Not sure if you noticed this yesterday or not, but Facebook Chat was not working for small window of time. Facebook made the announcement via their Facebook Twitter profile, and then proceeded to keep everyone updated through their official Facebook Fan Page. 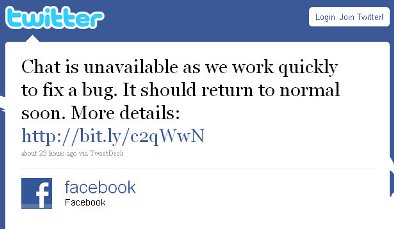 Then Facebook turned to their official Fan Page to add more details as to what was happening and of course, the comments soon followed.

Chat is unavailable as we work quickly to fix a bug reported to us. It should return to normal soon. Because of the bug, people could view friends’ chat messages and friend requests for a limited amount of time if they manipulated the “preview my profile” feature in a specific way. We’ve fixed that issue and took downChat as soon as we became aware of it. We apologize for the inconvenience.

I’m not really sure how long Facebook Chat was down for, but from the looks of the time stamps on the comments, it was at least 2 – 3 hours.

So did you notice that Facebook Chat was down yesterday?

If so, how long of a downtime did you notice?

Chat is, for me, the least of FB issues. Used chat rarely. I "deleted" not "deactivated" my account. Sick of finding out that my "friends only" settings kept getting changed to "Everyone". Email works fine. Phone is better.