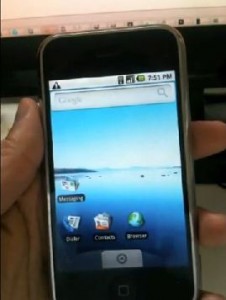 In a video clip the Android operating system seems to run smoothly with no lag.

As far as being useable David says that he can make phone calls, but he can’t hear the other person and vice versa. It’s a pretty neat little hack if you have an old iPhone 3G you might want to try it.

If you have an iPhone 2G and want to see how Android run on it you can see the video here.