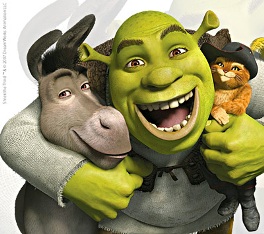 A couple of things are weird here – number one, Nick.com/Shriek is Nickelodeon’s resource page for all games, videos, and entertainment. So that’s weird in and of itself because what does Nick have to the movie Shrek.

Nick.com/Shriek is awful close to the actually movie Shrek.

Do you think that Nick is trying to trick people into thinking that the movie Shrek is somehow associated with them?

Shrek is produced and made by DreamWorks – right? And what does DreamWorks have to do with Nickelodeon?

The second thing that’s weird here is that on the resource page at Nick.com/Shriek, there is no mention of the DreamWorks moviek The Shriek.

Why is Nick showing a Dreamworks resoure

So perhaps Dreamworks has something in the works with Nickelodean. But Nick.com has literally placed all of their most valuable resources – at least links to them – on this one web page >> Nick.com/Shriek.

And if Nickelodean isn’t trying to leverage exposure from the new movie Shrek, then what exact are they doing naming a page Shriek?

By definition, Shriek is:

1 : to utter a sharp shrill sound
2 a : to cry out in a high-pitched voice : screech  b : to suggest such a cry (as by vividness of expression)

Do you think Nick has a good reason for using the word Shriek other than trying to leverage the very similar word Shrek?

8 replies on “Nick.com/Shriek – Shriek is Nick’s Catalog of Resources”

Hello everyone i love to watch Tv and my favroite show is yours wow your the best!

wow your the wrost….