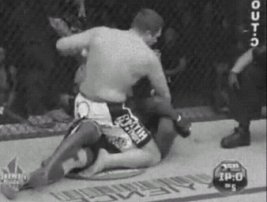 The heavy weights took to the cage last night with Kimbo Slice, the heavily favored fighter, facing off against Matt Mitrione in Canada during UFC 113.

The fight took 2 rounds to complete and ultimately Matt Mitrione won by the ref stopping the beating that Kimbo Slice was taking from Matt Mitrione.

Kimbo looked like his pride was the only thing keeping him from tapping out and ending the fight – but eventually, the ref took over and stopped the beating.

From the beginning, Kimbo Slice was looking strong during the 1st round. Kimbo appeared to be getting the dominant position and controlling Matt Mitrione. However, toward the end of the 2nd round, Kimbo was tiring – so was Mitrione – but Kimbo was tiring and getting a beating.

Eventually, Kimbo ended up on his back, Matt Mitrione was on top of him just pummeling down punches until eventually, the ref just couldn’t let Kimbo keep getting a beat down like that so he stopped the fight and Matt Mitrione won.

This fight was a great one because #1 it was the heavy weights in the cage and #2 it actually went nearly 2 full rounds – giving the fans in the stadium, and those watching from Pay Per View, their money’s worth.