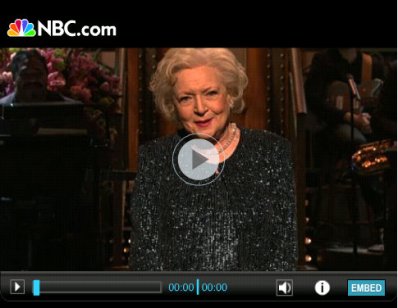 I’ll have to give to Saturday Night Live here lately, they have really made some great selections as hosts and have been driving massive viewers to the late night show, and also filling out the audience seats at the show in New York City.

Recently, Saturday Night Live really took a bold step by having Justin Bieber on the show. Although Justin Bieber was not hosting the show that night, his presence in the skits was unprecedented and clearly drove high levels of viewers to the show.

Just like Justin Bieber’s high profile appearance, last night Saturday Night Live had a host on that was really part of a greater movement of social networking power than it was anything else.

Betty White was the host of Saturday Night Live last night and she credits the appearance as nothing more than the amazing work of Facebook, and the Betty White to host SNL Facebook Fan Page.

During her monologue at the opening of Saturday Night Live, Betty White gave credit to Facebook and said that honestly, she had never heard of the social networking site. However, after she learned more about Facebook she ultimately declared that “Facebook is a huge waste of time!” – and then the audience broke out into laughter.

Just in case you haven’t seen the video yet from NBC, here is Betty White’s opening monologue from last night on Saturday Night Live:

Seeing Better White on SNL was purely entertaining and she is sooooo funny! I just love her and I commend SNL for choosing her to host.