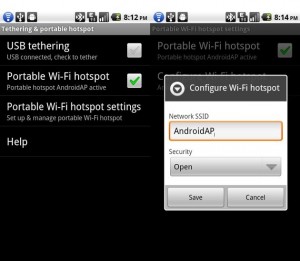 Android 2.2 to have Wi-fi Hotspot & Tethering

It seems like Google is going to really make Android 2.2 AKA Froyo an update people are going to really want.  Android 2.2 not only includes Flash support and performance improvements.In this screen shot of Android 2.2 will also included USB tethering which will allow you to use your data connection with your laptop to browse the web.

And the update will also included wi-fi hotspot connection, which will allow you to use your Android handset as a portable wi-fi hotspot.  Now what has not been determined is whether or not carriers can disable these features or charge a fee for using them.

2 replies on “Android 2.2 to have Wi-Fi Hotspot & Tethering”

YES it makes me want to buy an android. I'll go further and say that it makes me want to buy a Nexus One because the carriers won't be able to disable all the cool features. I know IPhone is cool, but Google is definitely winning the battle in terms of appearing to show more good will to their customers with features that save money. Well, at least with this gadget-geek consumer.