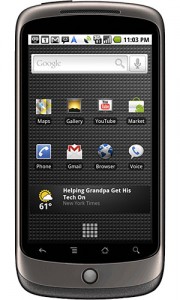 Well this is big news for a lot of people who were afraid of buying the Google Nexus One with out seeing the phone before purchasing it. On Google’s Blog the company admits that the Google phone online store didn’t reach many customers & was a niche channel for early adopters. The company will be working with existing partners to bring the Nexus One to retail stores. Once Google has increased Nexus One’s presence in retail stores they will no longer sell the handset through the online store. Instead the company plans on using the Google phone website as a window to show case the variety of Android based handsets that are available worldwide.