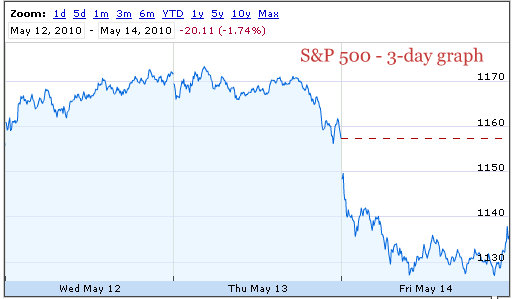 (New York Times) –  Financial markets went into a tailspin in Europe and the
United States on Friday as investors took a second look at the plan meant to end Europe’s debt crisis.

Only five days after the European Union and the International Monetary Fund approved a $957 billion package signaling a “shock and awe” commitment to head off a spread of the crisis, new worries emerged about the effect of drastic
austerity measures for the fragile European economies, the prospect of a restructuring of Greek debt, and the future of the euro.

The Standard & Poor’s 500-stock index ended the day nearly 2 percent lower, in preliminary figures, and major indexes in Europe were down 3 percent or more. The euro, which rallied sharply earlier in the week, fell below $1.24, an 18-month low.