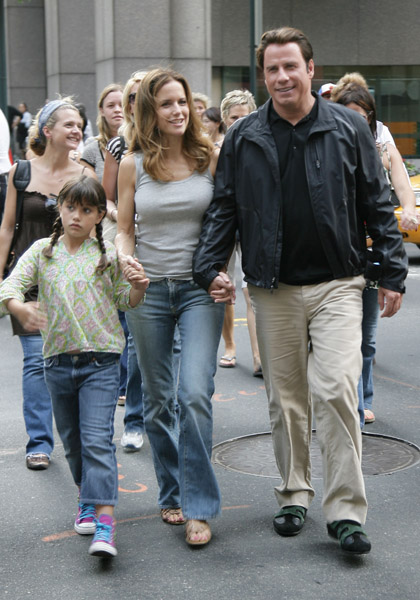 The past 24 hours for John Travolta and wife Kelley Preston have been a roller coaster of events. As we wrote yesterday, John Travolta’s dogs were killed at a Bangor, Maine airport as the dogs were walking into the tarmac area to greet John.

And literally within 24 hours of the news about John Travolta’s dogs being killed, we are now getting news that John Travolta’s wife, Kelley Preston, is pregnant. The big discussion around Kelley Preston being pregnant is that she is 47 years old. So is Kelley Preston too old to have a baby? I say heck no! If Kelley Preston is healthy, vibrant, and understands the complications and takes precautions (which I’m she will), then I don’t see where it’s a big deal at all. And I’m sure Kelley Preston’s doctors feel the exact same way.

I think it’s a great thing that John Travolta and Kelley Preston are working on bringing new life and joy into their lives after losing their 16 year old son, Jett, to a seizure in 2009.

And now back to John! On top of losing his son Jett in 2009 – as I just mentioned – John Travolta is now having to deal with the loss of his dogs. Apparently the dogs were being brought out to the tarmac to meet John Travolta, when a luggage truck on the tarmac hit and killed John Travolta’s dogs.

So when John Travolta was getting off the plane, expecting to greet his dogs and head out to their cottage in Maine, he was greeted with the unfortunate news about his dogs.

Like I said, I think it’s a great thing that John Travolta and Kelley Preston are working on bringing a new life, and new joy into their lives. Maybe they can get all of this behind them and start enjoying their family along with their daughter!

I might also add that it’s refreshing to see a Hollywood couple stick together like John Travolta and Kelley Preston have. I think they, as a family and as a couple, set a great example for the rest of Hollywood that seems to think it’s cool to get married and then within weeks or months, get a divorce!

Your title is ridiculous…what a day? His dogs died…you make it sound happy. Ridiculous.

"what a day" in that it was a very stressful day – a day they probably don't ever want to relive – thanks for commenting.

fix your grammar. Is it amateur hour or what?

thanks Paul – I just went through and tried to tidy it up – I don't have an editor so sorry about the grammer issues I struggle with – let me know what you think.

you have a great attitude…it is so terrible how harsh these people are!

hey seriously – people are typically VERY harsh in the comments. I think primarily because it's anonymous. But that's also why I like the comments and appreciate them so much – they are "purely honest" comments about my writing, and that always helps me.

I appreciate your compliment however… and thanks for visiting!

No, dear. The poster simply meant that the word is spelled "grammar." If you need an editor, I'm available and will do it for free for my resume!

With all the problems she is facing, having a child for her to free her mind with, will be good for her. Reactions to kelly's pregnancy.

Why are some people so mean???@vbbg

Why is it that John's dogs were killed, John's son died but Kelly some how gets credit for being pregnant? Kelly is half of the relationship and I'm sure those dogs were just as much her's as their son was. She needs to get a little more credit than just being John's wife who has no claim to anything in their relationship including their family dogs!