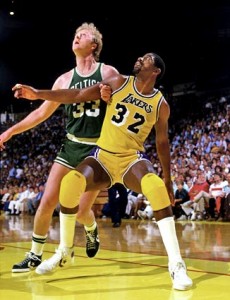 This weekend both the Lakers and the Celtics look to take one step closer to meeting in the finals for the second time in three years and the 12th time overall. They both take 2-0 series leads into Saturday and Sunday’s game 3 contests. If the Suns and the Magic can’t find a way to claw back into their respective series’ with game 3 victories, you can all but slam the door on their seasons. I myself think that because of both L.A. and Boston’s veteran leadership and experience we can all start to look toward the NBA finals for potential story lines. Is there a glimmer of hope after Dwight Howard turned it around in game 2 after stinkin’ up the joint with only 3 field goals in the opening contest? Sure there is. I also think that you can never count out a guy like Steve Nash who is as tough and as gritty as they come. However, the “three game stranglehold” is lurking for both the Magic and Suns.
My top story line for the finals you ask? How about Redemption for Kobe Bryant after Paul Pierce showed the whole world that HE was the best player in the universe during that 2008 playoff run where the Celts finished of their west coast nemisis 4-2 in the finals. Commisioner Stern, I know you are praying for the match up of these two great television mark….errr franchises. You can thank me later.