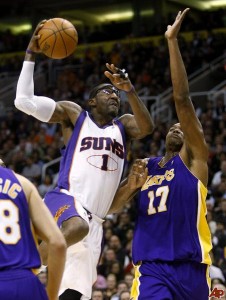 Amare Stoudemire through a cloud of criticism this week came through with a beast of a game pouring in a career playoff best 42 points in game 3 of the western conference finals. In the days leading up to the game the talking heads took shots at Stoudemire most importantly questioning his effort and desire to play the game. To go along with his 42 points he shot an impressive 14-18 from the charity stripe and had a game high 11 boards. As far as I’m concerned this now has become a series, but the Kobe and the Lakers will close this one out in 6 games. For now however, the grim reaper has left the building.