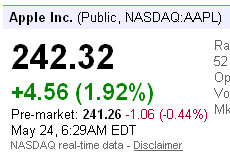 NASDAQ:AAPL – Apple Shares Down in Pre-Market

As the iPad sales are booming, Apple is finding itself short handed in meeting the supply side of the iPad. Customers coming into Apple retail stores are, in a lot of cases, being required to add their names to a waiting list upon which they will receive a phone call once their iPad arrives. The same is true with the iPad 3G.

The International release of the iPad is this Friday, May 28th. Apple is going to be challenged, however, in meeting the international demand for the iPad. And I can imagine these demand issues having a negative impact on Apple share prices.

Apple is expected to announce their next generation iPhone, the iPhone 4G, next month on June 7th at the WWDC2010 in San Francisco.

My concern with the announcement is that the public might be thinking the iPhone 4G refers to a 4G mobile web browsing speed. But in fact, iPhone 4G is referring to the fourth generation iPhone.

So the mobile web browsing speed isn’t any faster than the current 3G speed from the iPhone 3G and iPhone 3GS.

Again, my concern is that the marketing message of an iPhone 4G could have a negative impact on Apple share prices.