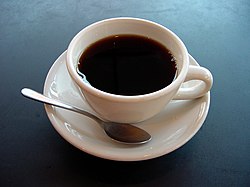 Those of us in the food and beverage industry notice a decline in the consumption of coffee when the weather starts to warm up.  After all, coffee is primarily a hot beverage.  (But – with the prolific growth of the chilled coffee market, you can satisfy your coffee junkie urges even during hot weather.)

Well, there’s a study out about coffee (another one!) that seems to imply, among other things, that drinking coffee helps keep a person alert and focused. (Maybe cutting our coffee consumption during the summer is the reason we seem to do more stupid things when its hot outside.)

The study says that drinking caffeinated coffee can temporarily sharpen your focus and memory. (None of that caffeine free stuff – just the premium leaded.)

But there is a catch!  The increased focus and memory association in coffee has not been observed in men.

“The medical journal of the American Academy of Neurology, found the effects of coffee may be longer lasting – specifically in women. At the end of this four-year study, researchers found that women age 65 and older who drank more than three cups of coffee per day (or the caffeine equivalent in tea) had 33% less decline in memory over time than women who drank one cup or less of coffee or tea per day.

This is exciting news for women, though it’s certainly too premature to recommend caffeine as a memory cure-all. And it’s important to point out that this study found no protective effect for true dementia or Alzheimer’s disease.”

The researchers say that the most likely reason for the difference in results in the consumption of coffee for men and women is that men and women metabolize caffeine differently.

So, ladies, if you want to retain your focus and memory longer, you gotta drink at least two cups of caffeinated coffee every day.  As for the men, well, we don’t have anything to focus on – or remember.  Our wives do that for us already.

small qty of coffee make you have better memory.
good to know this.