HTC EVO 4G, Some Customers Already Getting Their HTC EVO 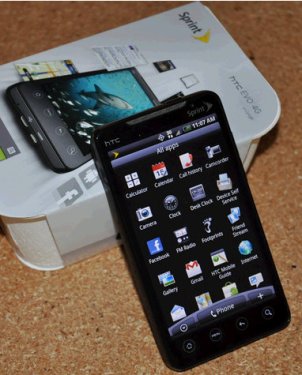 Some Sprint customers are already reporting that their HTC EVO 4G has arrived, and they are just now opening the package and playing around with their new phone.

HTCPedia is reporting that, “It is a fantastic day here at HTCPedia as I just received my HTC EVO 4G phone. As all of you know its official release day is June 4th, but I was lucky enough to get my hands-on one of these 10 days earlier.

The contents of the box are as follows:

Even though some customers are already receiving their HTC EVO – 10 days early even – there is still the issue of limited coverage of the 4G data network.

And despite the fact that you might be in an area that does not yet have 4G coverage, you are still going to pay $10 a month for the data access.

Regardless of the limited coverage area, the HTC EVO 4G, powered by Google Android OS, is still going to be one of the hottest phone releases since the iPhone.

31 replies on “HTC EVO 4G, Some Customers Already Getting Their HTC EVO”

does this apply to people who pre ordered through best buy or radio shack? i didnt know there was a pre order set up for sprints customers from sprints website. is that true? or are you a developer>

HTCPedia bought the device from an individual who attended the GOOGLE I/O event. At this event, Google gave out 5,000 free Evo's.

The Social Media SEO website has again reported incorrectly on a story. Also, this is a misleading title. This article quotes the first part of the HTCPedia article, yet did not seem to read the second paragraph on where HTCPedia bought the device.

i had my hopes high. thanks for the quick reply

a few days ago i emailed sprint and complained about the $10 fee and the response i got was that those 10 dollars is not for 4g it for uncapped internet since we will be using the internet like crazy they want us to have full access.

Sprints response to your complaint was half correct, half incorrect. The $10 dollars your paying is for 4G, which is an uncapped service. Wi-max 4G service is meant to be a fast broadband alternative for home consumption. Because of the speed increases, most users will start using the service more, and consume more data.

they gave me another response they told me it was for "premium data service" such as 4G.. So I said so pretty much its for the 4G service.. And she responded I am going to transfer you to a department that can better answer this question, then the phone hung up lol.. I dont think they are prepared to answer this question honestly lol..

Do you have to pay the extra $10 if you already have an unlimeted data plan?

Yes. This is a 4G Wi-Max phone. It doesn't matter if you live in a 4G Wi-Max area or not. Everyone who owns a EVO 4G with sprint will pay the $10 dollars. That sucks for people in NY or SF, but by years end Sprint will cover both areas and more.

4G in chicago and chicago suburbs is great, I generally get 5-6 down. The signal has seem to get better over time, because when I first got a Clear USB card I got 2-3 down. Maybe Clear/Sprint have improved the area.

I spoke with a Sprint Customer Rep over the phone and confirmed that you do NOT have to pay the 10 dollar a month extra if you do not live in a 4G area. OPTIONAL. If you want access to 4G then you can pay the 10 dollars a month.

so this is how misinformation is spread on the internet…nice!

@Shaun, the Sprint rep didn't know what they were talking about. Not surprising, since they're all being trained as we speak. Everyone who has this phone will require the $10 fee. It will get you unlimited data, with the expectation that you'll be using the phone a lot.

If you look at the speaking notes from the presentation in NYC, they've confirmed everyone will have to pay. This has come from the highest levels.

Remember though, you'll be paying significantly less for plans on this phone than comparable ones on AT&T and Verizon. This is because of Sprint's unlimited mobile-to-mobile (calls to any carrier), so you'll be able to get away with a lesser plan. That is, unless you call a lot of landlines.

I don’t see what the complaint is about the $10 fee…. That takes you to $79.99 for unlimited mobile to mobile no matter the network (99% of the people I talk to and know don’t even have a land line and ONLY use a mobile phone) unlimited data 3G and 4G if your in an area and unlimited texting/e-mail/data… No other company offers you that good a deal. Now for existing Sprint customers (Like myself) it’s basically an extra $10 tax that we are not use to but overall $79.99 a month isn’t bad at all…. Comparable plans with AT&T for an iPhone or Verizon on the Incredible or Droid will cost you much more per month… I have my EVO preordered at Best Buy and wish I lived in San Fran… Go to the craigslist page for that area and you can pick up an EVO that was given away at the conference for between $300 – 600 depending on who is selling it. A lot of those 5,000 phones that were given away can’t be used by the people who got them (There were plenty of people attending who got one and live in Europe where CDMA does them no good) not to mention the number of people who just love AT&T or Verizon and don’t want to switch to Sprint…. Plus from what I read IF you have one of those Google I/O give away phones they have special plans that are 30% cheaper than what you would pay directly on your Sprint account AND you don’t pay the $10 EVO charge….

Besides Sprint plans already being better and cheaper, the $10 is for a true unlimted data add on plan. Not for 4G, a fee, or some kind of tax. With that you get real unlimited data for 3G AND 4G both of which (4G and no data cap) are not available anywhere else on a cellular device. Even others who claim unlimited or uncapped still cap or restrict you at 5GB. The reason that it is mandated is because this phone unlike others has so many advanced features that will eat through 5GB a month unlike any other device before. Major bandwith eating stuff like HD pic and video, HQ youtube, HD streaming with HDMI outputm, dual camers video conferencing and video, etc. It will help eliminate network congestion and avoid excessive data overage charges, it is really a good thing to have and it’s a good deal. I would want and expect to pay $10 to remove the data cap for 3G with this phone nevermind it includes 4G as well.

Ok, Let me clear up a couple of misconceptions on the $10 premium add on fee. I work for Sprint, in their Advanced Technical Support (ATS) dept. The FCC imposes a 5Gb cap on all carriers. Most carriers implement overage charges to enforce it while others throttle down speed to deter you from going over. Either way, the $10 premium fee, lifts the cap period. Sprint has negotiated this fee with the FCC. The EVO is a multimedia intensive device and frankly Sprint doesn’t want to have to start sending out $17,000 bills the way ATT did for the iPhone so they approached the FCC and the fee was negotiated. Sprint knows 4G coverage is limited and we’ve been instructed to educate customer calling in to inquire about the fee that it is not for 4G access but to be able to fully utilize the functionality of the device. BTW, 4G does not fall under the FCC imposed restriction, because it is used for data service not voice. A loophole I am sure the FCC will close unless they can get a decent nation wide broadband plan going here really soon. Hope this clear somethings up.