Nexus One show’s up in third party retail stores. 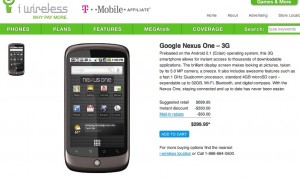 According to a press release by I wireless is an authorized T-Mobile affiliate has already started to sell the Nexus One on their website & through their retail stores.  The Nexus One will sell for $299.95 dollars with a two-year contract. Which is more expensive then going through Google’s website which cost $179.99 with a two-year contract. Which in order to get the subsidy you are only allow to choose the 500 minute plan. The Nexus One from I wireless will be able to be used with any T-Mobile plan. Seems like T-Mobile will have a wide variety of Android phones to choose from. Below is the full press release. To order the Nexus One from I wireless go to the company website here.

Coralville, IA – i wireless continues to offer the latest smartphones by announcing the arrival of new Android operating system devices. Customers will be able to purchase Android devices, including models that are 3G capable, at over 250 retail locations or at the i wireless website beginning May 18, 2010.

Android devices allow users to personalize their phones look, feel, and functionality with over 40,000 applications (apps) available via download through the Android Market store. Preloaded with Google apps and built to multitask, Android feature-rich devices create a superior mobile experience.

“We are excited to add the most popular Android devices to our complete line-up of smartphones,” says Gary Baron, vice president of marketing, i wireless.  “Customers will be given the option to choose from Motorola, HTC, and Samsung models that best fits their lifestyle.”

i wireless will offer several Android devices including the Motorola Milestone, 3G Nexus One by Google, HTC Hero, and 3G Samsung Behold II, all designed take full advantage of the wide array of available apps.

i wireless customers will have immediate access to 3G coverage and 10x faster data speeds in T-Mobile markets including Des Moines and Ames, Iowa, and over 130 cities in the U.S. serving over 200 million people.  i wireless will rollout 3G service in the Quad Cities, Cedar Rapids, Waterloo/Cedar Falls, and Iowa City markets throughout the summer, with completion scheduled for August 2010. In addition to faster speeds, customers will experience the ability to multi-task – text, email, or surf the web while talking on their 3G phone.

Founded in 1997 and headquartered in Urbandale, Iowa, i wireless is a partnership between T-Mobile USA and Iowa Network Services (a consortium of 127 Iowa Independent Telecommunications Companies).  i wireless has over 250 full-service company stores and authorized dealers across Iowa, western Illinois, and eastern Nebraska, offering customers the largest regional and nationwide coverage on the most advanced high-speed voice and data network. For more information, visit www.iwireless.com or contact Sarah Harpring at 319-390-7254.