This year, the buzz rose to a crescendo as URB.com confidently rumored to the world that Lauryn Hill would be the crown headliner jewel for the festival series, in a long-form style concert, performing her multiple-Grammy winning album The Miseducation of Lauryn Hill in it’s entirety. Also making the rumor rounds, talk of A Tribe Called Quest also sharing top-billing with the incomparable Ms. Hill.

The ROCK THE BELLS trek will stop at four major North American markets this summer, kicking off on August 21 at the NOS Events Center in San Bernardino, CA. The tour will continue on to Shoreline Amphitheater in San Francisco on August 22, Governer’s Island in New York on August 28, and will wrap up at Merriweather Pavilion in Washington D.C. on August 29. Visit www.rockthebells.net for ticketing information and the exact lineup per city. Fans are also advised to sign up for the Guerilla Union newsletter for important announcements, pre-sale details and up-to-date information regarding the tour.

A portion of the proceeds will go to Hip Hop For Haiti, a charity established to provide earthquake relief from this year’s tragedy. 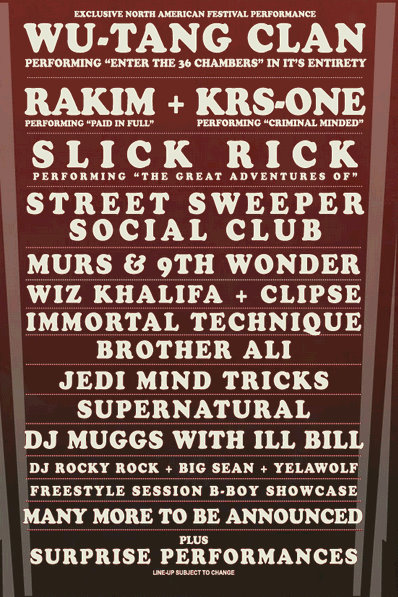