BP Oil Spill Stopped? New BP Oil Spill Live Feed Shows No Oil Spewing – from the looks of the live video feed below, BP has been able to successfully stop the oil leak from their broken pipe in the Gulf of Mexico. 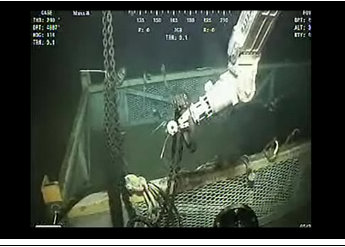 Yesterday, BP started the Top Kill procedure in an effort to choke out the spewing petroleum from their broken pipeline in the Gulf of Mexico. From initial reports, BP is saying that they have successfully stopped the oil from spewing from the broken pipe. And now, any spewing that is seen is actually mud shooting out of the pipe and not oil.

According to Reuters, BP (BP.L) sees some progress in its “top kill” bid to plug its leaking Gulf of Mexico oil well, but it could still take another 48 hours to conclude whether it has been fully successful or not, BP Chief Executive Tony Hayward said on Friday.

When BP launched the Top Kill procedure yesterday, the operation had to immediately be suspended after too much drilling mud was spewing from the broken pipe.  The operation was restarted yesterday in the afternoon using a new mix mud to try and prevent the fluid from escaping.  That new mix must be having more success.

Yesterday, the “top kill” operation had to be suspended after too much drilling mud was found to be escaping from the leak.  The operation was restarted yesterday in the afternoon using a new mix mud to try and prevent the fluid from escaping.

Ah no something is still spewing oil ! So guess again
.

Yeah man that feed is old cause that cap came off .
go there and see for your self and anyone else