Skip to the content
Tanning Beds – Melanoma Skin Cancer.
Tanning by getting too much sun is not the only threat of developing skin cancer.  Research shows that tanning beds also sharply boost the threats of melanoma, the virulent kind of skin cancer.  The risk increases over time, U.S. analyses said on Thursday, calling  for closer regulation. 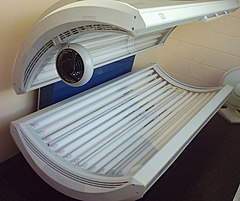 The researchers said that  individuals who use any type of tanning bed are 74 percent more apt to grow melanoma.  Frequent users are 2.5 to 3 times more apt to develop the skin cancer than people who never use them. (Frequent use is described as people who used tanning devices for more than 50 hours, or more than 100 sessions, or for more than 10 years.)
Melanoma cases are on the rise in the United States (Melanoma accounts for about 3 percent of skin cancer cases but causes most skin cancer deaths, and doctors have few effective treatments to offer once the disease has spread.)  The findings strengthen the case for regulating the popular tanning method.. In the United States, tanning beds are considered a class 1 medical device.
The FDA has been rethinking this classification and on Wednesday the agency circulated a video saying the use of any ultraviolet or UV-emitting device for the aim of tanning should be refrained.  The study found that melanoma risk was about 3 times greater among people who had used tanning beds that emit UVB rays and 4.4 times greater for UVA-emitting devices
The study authenticates prior research connecting tanning beds with melanoma, and answers any remaining questions about whether the procedure is safe, or if the risk depends on the kind of tanning bed used.
“We found that it didn’t matter the type of tanning device used; there was no safe tanning device,” said DeAnn Lazovich of the University of Minnesota, whose review appeared in the periodical Cancer Epidemiology, Biomarkers and Prevention.
Studies had suggested younger people were at greater risk, but Lazovich said the risk rises with frequency of use, regardless of age, gender or the device used.
According to the American Cancer Society, 68,000 people were diagnosed with melanoma in 2009, and 8,650 died of it.