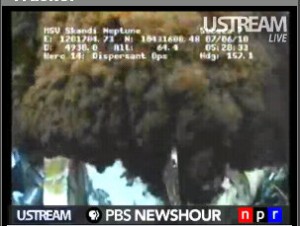 Below you can see the BP oil spill live video feed continue to just ravage the Gulf of Mexico with a non stop barrage of oil gushing into the gulf.

Here we are, about 2 months into this crisis, and despite the efforts of BP up to this point, the busted oil pipeline continues to gush oil into the Gulf of Mexico. The untold level of damage to the environment, animal life, and the economy of the gulf coast region is something that cannot be tolerated for much longer.

I’m starting to form the belief that the federal government should come in and take some drastic measures on stopping this pipeline. I’ve heard it mentioned that even a nuclear explosion could work at decimating the pipeline and stopping the leak. I realize that might sound like a ridiculous idea, but look at this video and you tell me how much more of this oil gushing into the gulf can be tolerated.

BP’s efforts have been slow to produce any measurable results. I realize that the recent containment cap has succeeded in funneling oil to a processing ship. But it has also succeeded at increasing the gushing oil by 20% – that’ 20% on top of the estimated 25,000 barrels of oil per day that is already gushing into the gulf.

I don’t know – but it seems that this disaster can not be tolerated for too much longer before something drastic has to be done to stop that pipeline from spewing oil into the gulf.

I have an idea, on how to stop this gusher, but don't know who to contact

I have an idea, on how to stop this gusher, but don't know who to contact

go to usnorthcom web page. they are taking ideas but they get about 1,000 per day

swim down n do it urself

They can't one it's to deep the would not have enough oxyge and two it would kill the people trying to cap it. And I'm 13. That's just common sense! How old are you?

Both BP and the Coast Guard have said they were going to flow the well through an additional pipe or hose. This must be the line that was used to pump the mud into the BOP's for thier top kill attempt. If they can flow thru this line they can get flowing and pressure data which will tell them if they can handle enough of the flow up that line to allow the plugging of the top of the bop's where the oil is entering the the Gulf. If the piece of drill pipe that was sticking up when they cut the riser was removedor can be removed maybe some type pf packing element could be placed in the remaining conduit above the bop and the well flowed out the kill line with no more oil entering the Gulf.

I see American thirst for oil continues unabated. Now you can swim in it instead of just burning it in your SUV's.

Why not remove the flange and bolt a new one on with a valve welded to it that can be shut off ??? Or maybe a compression fitting around the flange?

the crack is to big

I have a solution for fixing the oil spill that I am confident would work unlike there retarded robot idea.
They were able to pipe all the way down there in the first place, so why don't they pipe down again… For the first 40' you use 8 inch pipe encased in reinforced cement tapered from 10 inches up to 26 inches wrapped in 2 inches of rubber.. As you lower this pipe down with the use of 2 cranes you inncrease the size of the pipe back to the original 20 inch diameter……As you lower this toward the opening you add pipe to keep it above the water…Use gate valves!!! Have a camera attatched to the pipe so you can steer this long device into the opening, and use the little subs to help steer it into the opening… the thick rubber wrrapped around the cement will ensure a tight seal. When everything is sealed you can then pump cement (using a high pressure pump) to seal the hole entirely..I have similar experience dealing with high pressure water and this will work!!!

ever try to thread a needle from 1 mile away with 10-20knot winds (currents)? the pipes are broken in several places, bent, good idea if lining a straight pipe

This is the begining of the end for so many things. Fish stocks will be wiped out, not only in the Gulf but throughout the whole Northern hemisphere. BP stocks are being wiped out along with the millions of Pension funds that were invested in to it. the knock on effect cannot be imagined.

If the Oil gets in to the Gulf stream then its goodbye to every important fish breeding ground.

So why is the USA p***y footing around with this. A nation who boast that they are the best at everything, have the biggest Navy and arms.

get the navy in, get it blasted. before the 1st Hurricane hits and all is lost.

I think they don't want to lose that pipe. They are thinking how to stop it without lose it.

Nice counter. Could you add how many minutes of oil the U.S.A uses has been spilled? I have heard it is over 2hrs 15mins, does that sound right?

why is it that every idiot out there thinks that they are smarter than the dozens of engineers with decades of education, training, and experience. I'd be more than willing to bet that the engineers in charge of this mess know a hell of a lot more than any of you who seem to think that you have come up with the perfect solution based on the fact that you googled it…

Why Not get all the world Oil specialists to get to sort this mess out. start using pumps to suck it out of the water. drain off the water and skim the crude to another tank or tanks.

Attack the damn mess stop thinking about it.

i sa y plug all those wells in the gulf and subsidize all the small independant oil producers on domestic soli like me. let us drill wells on our l;leases on shore ans government pay 65% of bill and hire more people to run the wells daily. it cures the problem offshore and we have a flood of jobs on american soil and no more oil disaters

take a 1000 ton slab of steel, iron, perhaps 40 ft x 40 ft. and set it on top of any gushing oil. That slab will crush and contain everything beneath it, and wouldn't need to be a precision fit

sorry ur wrong the hydostatic pressure of ocean alone is un godly and this well has enough bottom hole pressure to flow 15000 barrels a day the pressure has to be in in the tens of thousands psi. learn before u pop off

Why not crimp it? Do several crimps in the pipe and wala! This way only half the oil is coming out of the hole…

I find it amazing that every one is so centered on giving suggestions on how to stop the leak and none on who is going to pay the people trying actually stop the leak and / or clean up the environment. Will gas prices at the pump sore up to astronomical numbers because US refineries are not getting enough oil from BP to supply our nations needs now?
Will citizens be taxed even more to help the US Government pay for the problems BP has caused to our invironement? Will BP be held accountable to pay resitution to those citizens that have lost years worth of income as a result of the spill. Because of the way the law was written for foriegn countries to pay restitution on any thing, it has a cap value (which in this case comes now where near what the loss of value will be to US citizens). Contact your congresman and other leaders of this country to demand BP foot the bill for all the cost of clean-up and resitution, after all it was their greed, and making sure the company CEO’s and others had their income assured for the year, that caused the problem in that they decided not to spend money to make sure their riggs were safe to operate and the evidently could have cared less about what happens to America’s well being.

John , you are right. It is amazing people are focused on sopping it instead of worried about how to pay. We should cease efforts of stopping the leak until we figure out who will pay. Good idea.

Seems to me that this has been going for about a month and a half and they are saying that at the slowest rate they show on the live feed they have dumped about 400,000 barrels of oil in the gulf since it started. Now this is one well that hadn't been put into production yet that is delivering oil into the gulf at the rate of about 250,000 barrels a month so I got a little curious and looked up the imports of foreign oil, about 350,000 barrels a month. Are we throttling back the delivery of oil on domestic wells so we can support other nations economies…sure looks that way to me, if ONE new well could produce half of our TOTAL foreign import of oil. More lies from a government that seems to be growing on lies.

Lets go back to the original containment box that failed and modify the top to slide on a track system from side to side. Install pipe connection on the top and lower the system over the broken pipe with the top in the open position. Then using the robotic arm slide the top to the closed position and lock into place. Attach pipe at connection and let the oil flow to the surface , install a shut-off valve at the surface. Load oil into tankers. Attachments should be installed on containment so that additional weights can be added to prevent blow-off.

whoever says a nuclear explosion would stop this is nuts . u wolud really have bad situation at least now u have pipe with integerty. u would destroy the pipe and cement on the out side of the pipe and it would leak for eternity.

thanks bp i hope everyone of u fairys burn in hell get it fixed or millions will die and it seems to me that there should be more people working on this where is everyone at i saw about ten boats in the water trying to clean this shit up come on .gov where u at on this one dipshit

Based on your skillful posting, I am surprised you found your way to a computer. I would be more surprised you could find your way to a voting booth.
Let's get the president to be a raging puppet like the majority of politicians trying to get elected. He should jump around like a 5 year old who lost his candy.. Maybe he could get a daily hour where he yells at BP, Afghanistan, Iran, North Korea, etc. Oh wait….. run it 24/7 and see if it resolves all issues.

bolt on a new flange, then turn off with a high PSI valve

bolt on a new flange, then turn off with a high PSI valve

you are a f*&^%ng moron. Surprising that gimps like you can type!

Very thoughtful and insightful comments. Enlightening indeed, and how about them Blackhawks eh! Viva italia!!! Viva my lun!!!