Lakers vs Celtics, Game 2 Was A Battle 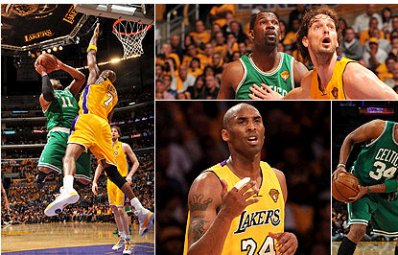 It was clear watching game 2 of the NBA finals last night between the Lakers and the Celtics, that I was watching basketball at the absolute highest caliber that I’ve ever seen before.

From Ray Allen setting an NBA final’s 3 point record, to Kobe Bryant coming in to close the half and scoring 3 pointers at will – last night’s game 2 of the Lakers vs. Celtics was amazing to watch as a basketball fan.

The Lakers seemed to have a pretty easy way of coming back from a pretty big deficit in the first half. I though for sure with this come back that the Lakers were going to come into the second half and start pulling away from the Celtics.

But the hard fought efforts of people like Rajon Rondo, and Glen “Big Baby” Davis, the Celtics were able to fight off the relentless attacks of the Lakers and end up winning game 2 of the NBA Finals.

Game 3 of the NBA Finals is now heading to Boston on Tuesday night with a 9pm tip off.

I have to say however, that unless Boston can come in and play at the high level of caliber of basketball each and every game, then the Lakers will end up winning the NBA finals. The Lakers are a refined machine, losing does not come easy for these guys.

28 replies on “Lakers vs Celtics, Game 2 Was A Battle (NBA Finals)”

i hate to say this, but the referees are making horrible calls this series. the fact that they cant even make the right call after viewing official replays is ridiculous

Anyone who ever played sports understands that once you start saying "the refs" you already loss psychologically because you should never put yourself in situation where "the refs" win or lose game for you . . . it's the players fault bad call or not due to LA have big men, Celtics in foul trouble but yet there were no REAL attacking basket to get them to foul out . . . until too late

STOP Rondo, it's not even Ray Allen hitting few 3-ptrs the Lakers recovered, but when RONDO drives, 2nd chance rebounds and block shots from behind, regardless of calling BOSTON wins . . . either have FISHER step up in defense or bench and get other little man other there because it was not like FISHER really scoring that they needed him yesterday . . . call spade a spade LAKERS PLAYED HORRIBLE with exception of GASOL and few times BYNUM (who needs to stop being passive and SLAM ON PPL)

I can see you envy your skin and color, we are proud to be black. we are proud of who we are and how we are created. You having that racist in your mind is a disease to you and it will follow your children and all generations that will follow you.
Go ask you mum who impregnated her to give birth to you and who is your real father.
Go furk you mum if you don't understand.

Someone set us both up… the real people who set us up are Derryl Fields and Anthony Mahi-Baker..STOP CALLING MY NUMBER!!!! we're just trying to clear our names so please understand this was a high-school prank…we'll get their numbers so you guys can call them instead