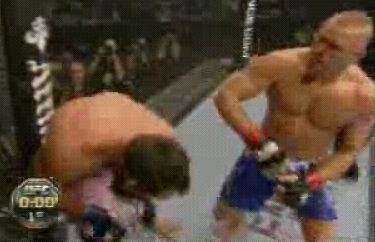 I’ve been digging around the web trying to a video of last nights Liddell vs Frankly UFC 115 fight and I finally found it.

(as of 4pm EST today, this video was working and you can watch the entire fight)

Liddell got himself knocked out cold by Franklin in the first round of the UFC 115 fight and the hit seemed to come out of nowhere from Franklin. The strike by Franklin, as you can tell from the video, looked to be more a defensive swing as Liddell was starting to lay into him with a flurry of punches.

Earlier in the round, Liddell took Franklin down to the ground by jamming him into the cage. However, it appears that Liddell cut his eye pretty bad from the take down. It looked as though he may have cut his eye on the cage during the takedown.

UFC 115 didn’t even take a full round to decide who the winner was going to be, and ultimately, Franklin came out the winner against Liddell by knocking Liddell out cold.

shane carwin is going to knock lesner right out ,hes never been hit buy anyone like carwin.lesners great wil feel carwin power in his grave…………………

Lol as much as I hate Brock he's gonna kill carwin

I suggest you find the video of Brock doing a shooting star press and landing on his head and then getting up. if you think Carwin can knock him out rofl!!!!

luck would be part of fighting! carwin will destroy brock!

Liddell isn't going to do anything, he's officially retired. Dana says he guarantees it.