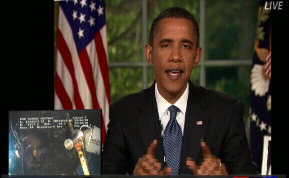 The estimates of the amount of oil that is gushing from the broken BP pipeline by experts in the matter continue to revise their estimates upward. The most likely flow rate of oil today is between 35,000 and 60,000 barrels per day. These estimates are climbing literally by the day – at least from each estimate that is released by the government. At the direction of the federal government, BP is deploying today a second containment option, called the Q4000, which could expand total leak containment capacity to 20,000-28,000 barrels per day.” Energy Secretary Steven Chu. “As we continue to collect additional data and refine these estimates, it is important to realize that the numbers can change. In particular, the upper number is less certain – which is exactly why we have been planning for the worst case scenario at every stage and why we are continuing to focus on responding to the upper end of the estimate, plus additional contingencies.” So how why in the world can’t experts from both BP and the federal government not be able to accurately estimate the amount of oil that is gushing from the BP oil pipe?