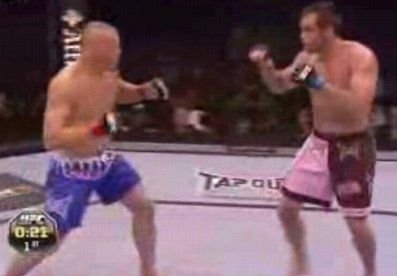 You can watch the full length video of the UFC 115 fight between Chuck Liddell and Rich Franklin below.

It honestly didn’t take long for Rich Franklin to knock out Chuck Liddell. Liddell was knocked out in the first round. However, as you watch the fight below, you’ll notice that at the time Liddell is knocked out, it appears that Liddell has the advantage and Franklin is hurt. However, Franklin was able to sneek in an upper cut that caught Liddell squarely on the chin and that was enough to knock him out cold.

Regardless of whether the hit was lucky, circumstantial, or otherwise, the point here is that Liddell got knocked out cold by Franklin and the KO goes to Rich Franklin, and unfortunately the loss goes to Chuck Liddell.

Will Chuck Liddell Fight in the UFC again?

Some people are speculating that Chuck Liddell fought his last fight in the octagon in UFC 115. Getting knocked out cold by Rich Franklin might have just been enough for the legend, Chuck Liddell, to hang up the UFC gloves.

I would have to say though that Liddell looked strong during the fight. He gave a couple of brutal kicks to Franklin during the first round. One of the nasty kicks may have actually broke some of Rich Franklin’s ribs as Franklin was clearly in pain after the fight.

Do you think that UFC 115 was Chuck Liddell’s last fight in the UFC octagon?

no couple should do it