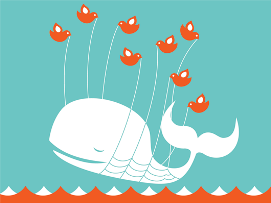 With so much anticipation building up for today – June 15th, the day the iPhone 4 is officially available for pre order – everyone decided to stay until midnight to see if AT&T’s website would have the link available to pre order.

Let me first tell you that it’s now 12:44am EST and AT&T’s website does not have the pre order links for the iPhone 4 available yet. Their press release stated that the information to pre order the iPhone 4 will be here >> http://www.att.com/wireless/iphone/.

The only exciting things that happened at midnight was that Twitter crashed right at midnight, and then for some users, AT&T crashed around 12:30am.

Now I can’t say for sure if all users experienced Twitter’s famous Fail Whale – the whale that appears when Twitter crashes due to spikes in traffic. But for me, Twitter was definitely down as I got the Fail Whale.

Then, on the AT&T Facebook Fan Page, people were reporting outages of the AT&T website around 12:30am.

All of this is more than likely due to the huge global demand to pre order the new iPhone 4. But as of right now, 12:48am, both the Apple website and AT&T’s website do not have any links to pre order the iPhone 4.

So for me, I’m heading to bed and I’ll check up on everything in the morning!

Until then, I hope the entire Internet doesn’t crash for the rest of you…

ok so Apple says it wont have a supply issue….but anyone trying to sell one is having a web server issue and is crashing their sites? pul-leeeeeeezzze!

well to be honest, I really think the iPhone will be available around 12:00 (PT) probably that’s why we all have to wait an extra 2 hours, but i can’t stay up until 2, so i’ll wait until tomorrow morning or something, and i think the websites are crashing not because is over loaded, but probably because they are making maintenance or something, well, peace everyone.

att has the pre order up!

where my iphone 4 pre order dammmmiiiiittttttt

It's up to premiere members for At&T pre-order your now if you have a business account!

Ahhh got mine at 12:26am with the premiere account.

rofl I know :) its shiney

Upgrade at AT&T website not apple.. Apple is crashing big time.. It’s 2:35am in Los Angeles and I just pre ordered mine on at&ts website.. Good luck..

@Ferociouz_Loko: it's possible you ordered the wrong phone – I see only the 3GS listed even when I click on the link for "iPhone 4 pre-order now" at AT&T's website. And Apple's site is definitely crashing as I try to complete the order. It never can make it all the way through.

FYI, I tried via AT&T Premier (still only see 3GS)

Did the ATT site go down? I got to "add to cart" 15 times and each time I got an error. Awesome, thanks apple!

Any luck ppl?? Maybe it’s the way I search for it.. Give me updates.. Everyone found it??

ATT site has nothing but 3Gs, and Apple says we'll be back soon. So ridiculous!

not showing on ATT premier links for me

no luck, it's not showing up for me on ATT site

i cant c it on att website..help

i just checked att and the only way to order the phone right now is to buy it as a new customer. youll still get this discount but they screw you out of your unlimited data plan if you do that.

This is how I made my search..

1. Google- at&t upgrade (lower case)
2.Click on the second link “UpgradeYour Phone-Wireless From AT&T” That one.. Not “AT&T UpgradeAdvantage(SM)”.. K.
3. It will take you to a simple at&t page.. Says “Upgrade Your Phone”.. Now on first sentence you will see a blue colored link.. Says “myWireless Account”.. Click that one..
4. Sign in.. Takes you to your account page.. There u will see a link that says “Check upgrade Options”.. Click on that..
5. Select your phone and click on “upgrade Selected Lines”..
6. You Should see iPhone 4 now.. With the rest of iPhones.. If you don’t see it.. They might be doing maintance.. I pre ordered like that..

i got to the checkout for apple but then the price went up to $399, my upgrade is 7/17/10, that should qualify me for the early upgrade?

This is ridiculous! It doesn't show up on the AT&T order page, just 3GS's. And Apples site come once an hour only to crash out again and go back to the maintenance page. I hate this crap. So now, as I'm sure everyone else is also, I am coming to the realization I will have to do this at an AT&T store…where all of you will be at. can't wait to stand in the line all over again. This sucks. I hate you apple and AT&T…but I love your phones.

The AT&T Wireless website is completely hung. Dead as a doornail. Can't even get on there to pay my bill…I guess they don't want my $$$. LOL

The AT&T Wireless website is completely hung. Dead as a doornail. Can't even get on there to pay my bill…I guess they don't want my $$$. LOL

At my local store, they couldn't even log on to preorder……….

At my local store, they couldn't even log on to preorder……….

AT&T is now down, "upgrading" their system…. :rolleyes: