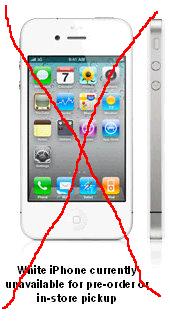 iPhone 4 Pre Order in Black Only, No White iPhone 4

There was a lot of buzz yesterday about the upcoming iPhone 4 pre order release. A lot of the buzz, especially late last night, was circulating around what time exactly we could expect the iPhone 4 to hit the AT&T and Apple online store websites.

But starting around 9pm EST last night, the conversation on the web was shifting to actually pre ordering the iPhone 4 with the rumors that the device would only be available in black for pre order customers.

Apple’s online store confirms what was speculation last night, and says that the white iPhone 4 is currently unavailable for pre order or in store pickups.

According to some sources, the white iPhone 4 will be available later this summer.

So if you are wanting to hold out for the white iPhone 4, then unfortunately you aren’t going to be part of the pre order frenzy taking place!