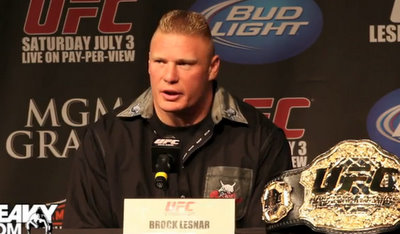 The UFC 116 pre fight press conference was a great show of both the respect that the fighters have for each other, but also it showed the intensity from which these fighters want to be champions.

Brock Lesnar is obviously very comfortable in front of the cameras and enjoys cutting up any chance he gets. He is an intense fighter, and it is clear that he is ready to fight.

Shane Carwin takes a more reserved approach during the press conference. He spoke a bit more politically and kept his fight in perspective.

Both Shane Carwin and Brock Lesnar have respect for each other, are ready to fight, and both are determined to walk away with the heavyweight championship belt.