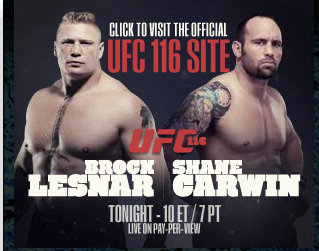 The stage is set for UFC 116 in Las Vegas. The featured fight for UFC 116 is the heavyweight championship belt between Brock Lesnar and Shane Carwin. These two heavyweights are ready, in shape, and determined to quickly eliminate the other guy.

So Brock Lesnar and Shane Carwin are on the main fight card.

Here’s the other fights and the UFC 116 fight card:

You can watch UFC 116 via Pay Per View on TV tonight.

However, you can watch UFC 116 live online via Yahoo Sports.