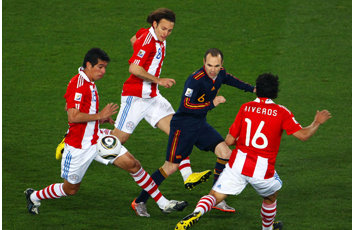 The featured World Cup 2010 match between Spain and Paraguay is live right now on ABC TV. The Spain vs Paraguay match is now playing anywhere on the web today. Typically the World Cup matches are showing live on ESPN3.com. However, that’s not the case today.

So if you are wanting to watch the World Cup match between Spain and Paraguay, then tune in to ABC tv right now.

The 2010 World Cup is coming down to the final teams and the pressure is getting high for the teams to either win, or get eliminated.

The match between Germany and Argentina ended in Germany routing the Argentina team 4 – 0.