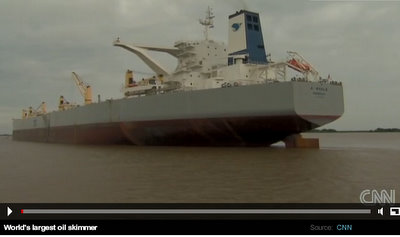 The massive oil skimming vessel called A Whale has just completed a 2 day testing period where officials are monitoring the effectiveness of it’s oil skimming capabilities.

After 2 days of testing, the results so far have been “inclusive”.

Primarily due to rough seas and high waves, the A Whale skimmer has not been able to show conclusive evidence of its effectiveness in skimming and processing oil from the gulf waters.

The Coast Guard is working closely with the A Whale owner TMT from Taiwan and expects testing to continue.

The forecast is that over the next several days, the gulf waters will be more conducive to effective testing from the  A Whale vessel and results will be more readily accessible.

The Coast Guard has also stated that they are ready to deploy any and all resources into the Gulf of Mexico to facilitate the cleanup of the massive gushing oil spill.

Here’s a CNN video highlighting the A Whale vessel:

Our leaders are a joke. This catastrophe could have been avoided had our Goverment not been sleeping with the oil industry. Once again our environment suffers at the hands of our politicians and regulators. I hope heads roll in November 2010.

Oh…like this wouldn't have happened under "W's" watch…if you think he would have done a better job…then you have a very short memory. Even his administration couldn't get their act together when disasters happened while he was President!!! I hope heads roll in November 2010, too…but it will be because I'm voting ALL the old timer's OUT…I don't care what party they belong to. It's time for TERM limits and more middle of the road folks in office. Get the far right & far left out of our way!