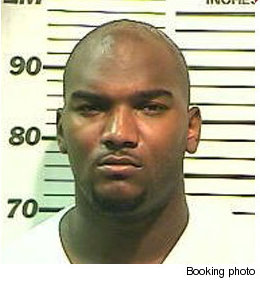 JaMarcus Russell, the former Oakland Raiders number 1 draft pick in the 2007 NFL draft, was arrested today in Mobile, Alabama and charged with possession of a drug called codeine syrup.

Codeine syrup is a controlled substance and requires a subscription for users to have possession. A sheriff’s spokeswoman released a statement today stating that JaMarcus Russell, 24, was arrested today at his home in Mobile, Alabama during an undercover investigation.

JaMarcus Russell was booked into the Mobile jail and then later released on a $2500 bond.

What is codeine syrup?

Codeine syrup is a controlled substance used for medicine, but is also sold in the black market because you get high from it. You can legally have it if you have a prescription, but it seems JaMarcus Russell didn’t have one!

This of course does not bode well for ol’ JaMarcus Russell.

The NFL will be coming down hard on Russell obviously with fines, but also possible suspensions.

It will be interesting to see how this all unfolds this week.